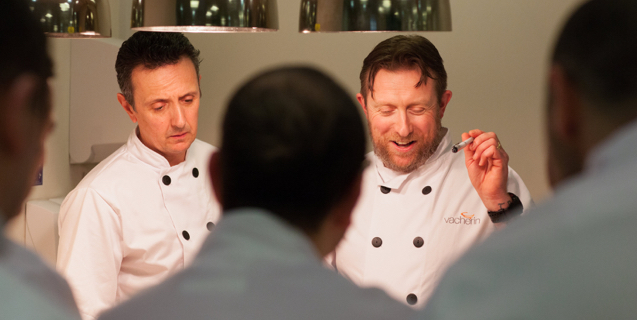 Vacherin Celebrates their Great and their Good of 2017

The Vacherin team came together in force last week to celebrate their achievements over the course of the past year and to recognise their ‘Hot Shots’; all those at Vacherin who have helped raise the bar further and have gone above and beyond to bring innovation, deliciousness, great customer service and fun to their clients’ businesses. The much-heralded Hot Shots trophies were awarded in twenty different categories including Outstanding Customer Service, Most Creative Idea, Most Outstanding Dish, CSR award entrée receptionist of the year and the ultimate accolade of Employee of the Year. Eighteen staff were awarded with long service awards and all those who have gained qualifications or completed their apprenticeships were recognised. Vacherin’s three owners Mark Philpott, Clive Hetherington and Phil Roker presented the ‘Tastier’, ‘Brighter’ and ‘Stronger’ prizes respectively. These awards recognised three team members: Nikki Low, Head Chef for his unequivocal love of food; Emma Abbruzzese, Catering Manager for her absolute commitment and delivery of excellence; and Zaria Romero, Catering Manager for raising standards and the stature of catering at her site…always with a smile and energy that knows no bounds! Dan Kelly, Vacherin’s Director of Food announced the stars of the annual Hot Nosh culinary & creativity competition held in June and attended by guest judge Robin Gill with whom Vacherin recently announced their partnership which will focus on chef development. Employee of the Year was Malcolm Hill, who runs Premier Crew, Vacherin’s own team of support staff. Mark Philpott, Chairman, who introduced Hot Shots five years ago to formally thank everyone for their contribution to Vacherin’s success and to recognise the individuals who set the standard for others to follow said “Hot Shots has to be my favourite Vacherin event of the year. We’re nothing without the brilliant people who work for us so to have the chance to gather our stars under one roof, acknowledge their contribution to Vacherin in front of their peers and to personally thank them for their unfailing enthusiasm has to be the highlight in anyone’s year”

Posted by Vacherin on 31 Jul 2017
Back to What's Cooking?
CATEGORIES